The loss of SMS Viribus Unitis 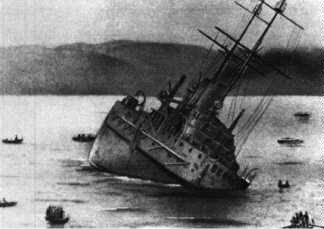 The Navy of the short-lived State of Slovenes, Croats and Serbs suffered the loss of its flagship and Commanding Admiral within its first day of existence without leaving port.

As the Austro-Hungarian Empire began to collapse and fracture a very powerful movement to unite the Slovenian, Croatian and Serbian peoples began to gain ground and on the 5-8th October the National Assembly of the State of Slovenes, Croats and Serbs was established in Zagreb. The Council declared that it represented the peoples of Slovenia, Croatia, Serbia as well as peoples living in Bosnia-Herzegova, Fiume, Dalmatia, Istria, Trieste, Carniola, Görz, Styria, Carinthia, Baǐka, Banat, Baranya, Medimurje and parts of South-west Hungary with one council member representing a hundred thousand people.

The Council rejected Emperor Karl IV’s call for Federalisation of Cisleithania and on the 19th October announced it was the Supreme representative body for south Slavic peoples and that previous borders were no longer relevant and that their people would be represented in their forum alone.

With Karl IV fighting a losing battle, permission was given to the Minister of War to grant local Military commanders the freedom to discuss how to maintain law and order with local People’s Councils. Finally on the 29th October the State was officially established under President Anton Koršec.

As the Austro-Hungarian Empire ceased to be Karl IV and his ministers were eager that the Imperial fleet did not fall into the hands of the Allies and decided to gift the whole fleet, merchant marine fleet, port facilities, arsenals and fortifications writing to the National Assembly. On 31st October the Navy was officially handed over to Admiral Janko Vuković, , a veteran commander of the fleet including as commander of the flagship, SMS Viribus Unitus. Vuković was placed in charged of the State’s new Navy and he raised his flag over the Viribus Unitus renaming it Jugoslavija with Croatian sailors singing the Hymn Lijepa Nasa and celebrating whilst the Austrians, Hungarians and other nationalities were heading for home believing the war to be over. The National Assembly sent diplomatic notes to the Etenete nations informing them that there vessels were no longer combatants and declaring the State of Slovenes, Croats and Serbs was neutral in the ongoing conflict though the Allies did not recognise the fledging country.

As Admiral Vuković and his men turned in for the night they were blissfully unaware of a hidden threat that had crept across the Adriatic. Equally ignorant of the status of the Austro-Hungarian fleet were two Italian frogman, Raffaele Paolucci and Raffaele Rossetti who had had been dispatched aboard a MIgnatta (Leach) with orders to sabotage the emeny’s warships. The Italian Naval aim to destroy the Austro-Hungarian Dreadnoughts could not be carried out at open sea with both opposing sides in the Adriatic unwilling to suffer loses and attempts to bomb the vessels with aircraft had been unsuccessful. Pola Harbour’s defences were also formidable discounting a raid by naval forces similar to the sinking of the pre-dreadnought SMS Wien the previous December in Trieste.

Paolucci had made the suggestion to his superiors earlier in the year believing that saboteurs could swim into the harbour unnoticed and place charges upon the hulls of the ships. In July 1918 Paolucci began working with Rossetti who had developed the Mignatta from an unexploded German torpedo and would give them the ability to travel at 3 Km/H underwater using compressed air engines. The two began a three month training planning regime in the Gulf of Venice. They were assisted in their transit across the Adriatic by the torpedo boat MAS 95 before mounting their craft at 10 p.m. and telling the crew they would return within five hours.

Within thirty minutes they had reached the harbour’s first defensive barracades consisting of floating metal cylinders on cables that could not be passed with their torpedo easily and the two frogmen decided to take the risky approach of pushing it over the metal barricades. Despite the extra noise this generated, being illuminated by large searchlights and having a semi submerged U-boat cruise past them they managed to proceed unmolested to the spiked sea wall where they had to push their craft over a sea gate this time the noise was masked by heavy rain and hail which had begun to fall. By this time the two Italians were beginning to question whether they should continue with the mission as the conditions they were encountering were not what they had prepared for but they pressed on through the anti-submarine netting that was the final barrier between them and the prize of warships. Despite being aided by agents within the harbour they had taken too long and it was already 3 a.m. by the time they reached the warships and 4:45 a.m. by the time they reached the Jugoslavija. As the sun began to rise above the horizon Rossetti placed one of the two limpet mines to the underneath of the dreadnought setting the time for 6:30 a.m. swimming underneath and holding his breath. Whilst a second was dropped onto the harbour floor.

With their mission complete the two frogmen attempted to head for shore but were spotted by sentries on the deck of Jugoslavija and they were soon picked up by one of the dreadnought’s boats and soon the two men found themselves on the deck before Admiral Vuković who demanded answers. Rossetti admitted that they had placed explosives on the hull and that it would soon explode, he also advised the Admiral that he should save his men before requesting permission to abandon ship. Vuković ordered his men off the ship and gave permission for the Italians to do the same and whilst the ship’s crew descended into panic and bustled to try and alight the doomed vessel Rossetti and Paolucci climbed ship’s rail and jumped into the harbour. Once in the water the hapless Italians found themselves rounded up by angry sailors and dragged back aboard the dreadnought where a mob demanded to know where the mine was and that should the vessel explode they should go down with it and it took the intervention of Vuković to save their lives.

As the deadline for the explosion passed the two prisoners began to grow sullen and worried that the mines were defective and their months of training and the hours in the cold of Pola harbour were all for nothing. With the panic subsiding Vuković ordered the men to return to the vessel and the prisoners to be transferred to the Tegetthoff. At 6:44 a.m. the mine exploded.

Like many warships of the period the Jugoslavija had very little armour beneath the waterline and there was a concern that to do so would be detrimental to the vessel’s speed and manoeuvrability. Many naval planners had not believed that torpedo boats or submarines would be as much of a threat as the war had proved them to be and the idea that saboteurs would be able to sneak into the fleet’s home port and place a bomb on the hull was unthinkable. However the design o the Tegetthoff class had placed the ship’s coal bunkers against the hull acting as another layer of armour as the coal would absorb the blast and the bunkers would not fill with water as the coal already filled much of the space. Unfortunately for Jugoslavija her bunkers were empty and rapidly filled with water and, as the damage was to extensive for the pumps and water tight doors to contain and the once proud flagship of the Austro-Hungarian fleet capsized and foundered by 7:00 a.m. with Vuković stood on the stern calmly going down with the ship and three hundred of his men.

The blast from the mine on the harbour floor caused damage several ships and sank the merchant ship SS Wien. For the State of Slovenes, Croats and Serbs it was an embarrassment with them not only losing their flagship and newly appointed Commander in Chief to two Frogmen they did so within twelve hours of receiving them. Needless to say there was a degree of horror felt by the vessel’s former owners in Vienna because, despite the uniform and flag changes they were still the Dual Monarchy’s men. For the Italians it was a great victory and when the two interned sailors were returned to Italy they were both awarded the Gold medal of Military valour and 13 million Lire prize money each. The Fleet of the State of Slovenes, Croats and Serbs was surrendered to the Italians and their Allies shortly afterwards when a joint taskforce moved to secure the Croatian coast and make sure the former Austro-Hungarian fleet was neutralised as a threat.
Posted by Chris Sams at 05:30 No comments: