Massacre over the Meuse

It would be understandable if you have never heard of the Fairey Battle. The Battle was a modern light bomber when it was designed with a Rolls Royce Merlin mark I with 1030 hp. As the Battle's career continued so too did the engine's evolution with mark II,III and even IV. Compared to contemporary fighters like the Heinkel He 51 or Gloucester Gladiator it's top speed was comparable at 241 mph.

It's design looked very modern to, no longer a biplane but instead a low cantilevered tapered wings and it elongated cockpit. Unfortunately with the war looking more and more likely fighter design really improved with Spitfires, Hurricanes (using the same Merlin mark II) and more importantly; the Messerschmitt Bf 109. Suddenly the Battle was out classed and with its solitary Browning .303 gun in the wing and Vickers K operated by a gunner in the rear of the cockpit it was outgunned. The 109 E, the most modern 109 in 1940 had 4 machine guns and the newer variants were fitted with an Oreliken MG FF cannon! 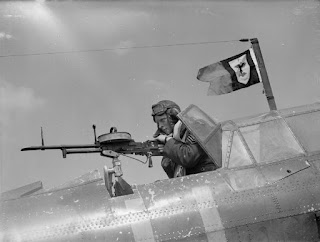 Never the less, with little else at hand in 1939, the RAF sent the bomber to France. Despite it's inadequacies a tail gunner shot down the first German aircraft over the front some three weeks into the war. It has been suggested that the overly eager jagdflieger presumed they were fighters and did not realise there was a tail gunner! The lesson was learnt from then on.


On May 10th 1940 the Wehrmacht rolled into France and the low Countries knocking the Allies back with such ferocity that many bridges were still intact. By the 12th the German army was massing by the Maastricht bridge fortifying it with 88 and other assorted flak detachments and organising a fighter umbrella. Should the bridge remain in tact a German thrust could cut the Allied front in half. It had to be destroyed.

Through a cloud of flak a flight of a squadron of Blenhiem bombers struck first from 3000ft. They broke formation after delivering their payload but quickly reassembled on spotting fighters. This saved their lives as they covered each other and massed their fire. Despite the enemy hitting all of the craft and what their leader described as the heaviest flak he had seen or could imagine possible only four craft were lost.


Elsewhere 12 Squadron's CO asked for volunteers to strike the bridge. All the pilots volunteered but with only five Battles available lots were drawn.A Hurricane force was sent ahead to sweep away enemy fighters but they would be unable to do anything about the heavy ground fire. As the formation of Battles arrived, already under fire from the long range guns and with the Infantry adding their MG42s to the chorus Flying officer Garland asked his observer Sgt Gray what he thought, together they showed the reckless bravery in the face of adversity that has been the hallmark of the British serviceman for centuries. They flew on.

With the air clear of fighters the Battles flew through the soup they saw German trucks crossing and they dived immediatly. Garland dived the aircraft as low as possible and Gray released the 1000lb bombload upon the bridge. A column of water showed a near miss but there was also a blast as one vehicle was caught in the fire and another from a bomb striking the first span of the bridge. The Hurricane pilots regisetered that the bridge had been blown and temporarily out of use. As the Battles pulled for altitude and turned for home they were pounced upon by German fighters that had slipped past the Hurricanes. The resulting carnage left one Battle to return to the field with a solitary survivor, another crashed into the river, another into the fields. Garland's aircraft attracted the most fire as the group leader and he, Sgt Gray and Sgt Reynolds (the airgunner) were killed and their bodies interned in secret by locals. (1)

Both Garland and Gray were given the VC for their cool actions that saw the bridge blown, Sgt Reynolds recieved no citation as he was not part of the decission making process.
On the 14th May the German army crossed the Meuse in two places near Sedan. Six more battles made an attack at 5am and in the half light were came back with only one pilot injured. At 7.30 am another four attacked the bridges but were again unsucessful despite all of them returning. By mid afternoon a range of targets including the pontoon bridges, and a further four between Mouzon and Sudan were selected. Sixty-seven Battles took to the air and only thirty-two returned having been ravaged by the Luftwaffe's aircraft and the flak batteries.  Over the following days Six crews returned to base from the raids including a crew who had attended their wounded pilot until he passed away and a pilot who was wounded in two places but still swam across the river!

The Battle did not see active service after the French campaign except in training and Costal command patrols.

Despite the bravery of the crews of the light bomber they were simply outgunned and outclassed by the oppoistion and were overtaken by events in the theatre that saw the Germans smash across the rivers and Blitzkrieg to the coast.
Posted by Chris Sams at 14:25 No comments: