George Bone and the Boer War Pt I 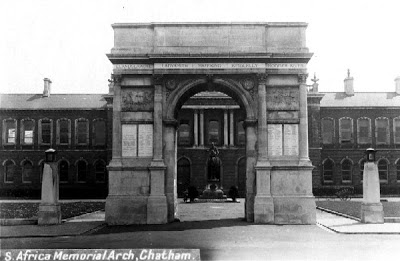 One of the dark periods of British history is the Anglo Boer war period at the end of the nineteenth and beginning of the twentieth century. I will go on to talk about this at length in another blogpost however.

George Bone was born in Sussex in 1871 and eventually joined the Army as a Royal Engineer rising to the rank of Corperal Master Wheelwright with the army number; 23654.

Whilst serving at the Royal Engineers Barracks he met Mary Williams whom he married in March 1898 at St Mary's church in Gillingham.

As an army wife she joined with him when he moved to other barracks and their first and only child, Albert Richard Bone was born on 25th January 1899 at the Curragh Camp in Ireland. Unfortunately George never met his son - he was already in South Africa serving with the Army in the Boer War.

He received the South Africa medal 1899-1901 with clasps for Wittebergen, Driefontein, Paardeberg, Modder River and Belmont.

Although I was told he died after Belmont it would appear that the chronology is out of order and that he actually died after Wittebergen or in a skirmish not long after that in 1900. The legend is that he was shot in the liver during the battle and took three days to die.

He was buried in Lowersfontein at the British War Grave Cemetry where he rests to this day. His name also appears on the Boer War Memorial in Brompton Barracks.

I want to find out more about him, I have been trying in the past but am going to make a concerted push for information so I would be grateful for any pointers. None of my direct family were killed in the First or Second World War and for me this is like the quest many undertake for an uncle, their grandfathers, cousins in the Somme or at Dunkirk. I will write more as things come to light.
Posted by Chris Sams at 13:24 No comments:

The Crucified cat of Albert

By September 1918 the once proud German army was in severe disarray. The Allies were forcing them back behind the so called "Winter line," which was the proposed position for 1919 and all the work of the great summer offensive had been wiped out.

The Prussian guard volunteered to stop the Australian advance at Mont St. Quentin. One prisoner told his captors that within two hours of arrival they had all been captured and killed including the Staff officers! He said that the "War is about finished now" [1] p.529

As they retreated much equipment and a trail of their dead was left along the muddy roads and fields. There also lay a trail of destruction. Villages were burnt and booby traps were laid with delayed action fuses in large houses and churches to catch unaware Allied units out when they were looking for a sheltered billet. [2] p.531

One such incident is reported in Sir William Orpen's An onlooker in France 1917-1919 during the liberation of Albert in September 1918.


The day the Boche were driven out of Albert, General Rogers went there and brought back the story of the cat. When Tommies got into the town, even through the din, they heard the wailing of a cat in agony, and they found her crucified on a door, so they naturally went to take her down, but as they were pulling the first nail out, it exploded a bomb and many were killed. It was a dirty trick! [3]

Although I've not been able to verify the story so far it is indeed possible. All manner of hideous booby traps have been employed by soldiers over the years. North Vietnamese troops would wedge grenades in tins, the US used to hide faulty rounds on the dead and in enemy ammo dumps that when fired would blow up the gun and unfortunate holding it.


During the Second World War my Grandfather told me of a group of Tommies who entered a house formerly held by the Germans. They went in through a window, disarmed the bomb on the front door, combed the entire house and were satisfied it was clear. Then they started moving the dead out. One corpse had been laid over a pressure activated bomb which promptly blew up.

The Cat of Albert is not the only crucifixion story either. Rumours are abound of a Canadian sergeant being found pinned to a door with 6 bayonet blades in 1915.
Although a documentary in 2002 uncovered some evidence and even the name of Sgt Harry Bands, there is no concrete proof that it, like the Albert cat ever happened - yet, neither incident are beyond possibility.