George Bone early life up to the Boer War 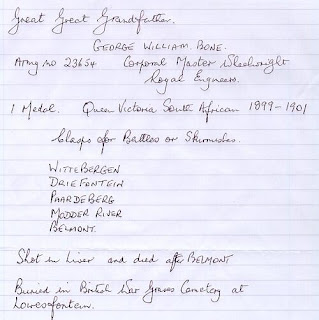 As my research into my Great-great Grandfather George William Bone continues I thought I would
document and share what I have discovered so far about his life leading up to his tragic death.


In the beginning I was handed the attached note by my Grandad (who had married George's Granddaughter Audrey Bone) when I first started working on the family tree.


It was intriguing and I took it very much at face value some twelve years ago and didn't research it. In 2004 I started messing around on Genesreunited and managed to clear up a couple of other details but it has only been in the last couple of months since casually starting on Ancestry.co.uk to pass the time that I have discovered the following narritive of his early life.


The Bone family were settled in the village of Westbourne in Sussex where William Bone (b. 1812) was an agricultural worker toiling in the fields a vocation he was joined in by his son Albert (b. 1841).

Albert married Louisa Terry (b. 1845 in West Wittering, Sussex) before 1863 and settled in to West Wittering and started having children.


The boys all seem to have wanted to better themselves and all learnt a trade. This was probably caused by the shift away from manual agricultural labour during the 19th Century, even Albert senior became a gardener as work in the fields dried up. George was a wheelwright, Arthur a groom, Archie a draper and Bertram a saddler with only Albert being different and becoming a shipping clerk.

Whether through coincidence or not, all the Bone boys joined the army. George joined the Royal Engineers in 1889 as did Albert in 1908, the others joined the Army service corp (Archie in 1900, Arthur in 1901 and Bertram in 1905).

At the time of writing I have little details about his career prior to the Boer War. According to the 1891 census he was aboard a vessel serving as "Crew" in Northumberland.

He ended up at Brompton Barracks in Gillingham, Kent. It was here that he met Mary Ann Williams, possibly through her brother Richard who signed up on 23rd January 1894 and went on to become a sergeant electrician. Mary (b.1878 - 1948) was the second eldest of eleven surviving children (according to the 1911 census, Rebecca, Mary's mother, had had 12 children by her husband Richard, a retired Royal Engineer, Sadly one had died) and they lived at number 9 "Best town." Chatham in 1891. According to the author of Bygone Medway - after an exhaustive search, this is in fact where Hards town Chatham is now.

Mary and William were married at St Mary's church in Chatham on 22nd March 1898.

War was looming though and regular soldiers were already being gathered to go to South Africa. As a master Wheelwright George would have been invaluable on the vast African Savannah where great convoys of supplies tracking back and forth laden with supplies.

The muster point was the Curragh Camp, County Kildare with his pregnant wife, though the wedding certificate states he was already at Curragh when he married Mary.. According to family myth he never saw his son Albert who was born 25th January 1899 as he had already departed for the Cape. If he had, he would have departed before the rest of the gathered forces who left later in the year. It is conceivable though, as an engineer that he might need to arrive before the fighting line regiments.

His career in Africa though is another story.
Posted by Chris Sams at 10:15 No comments: