Guard down! The death of Officer Stites and the Battle of Alcatraz

The 2nd May 1946 was the beginning of a dark and bloody episode in the history of Alcatraz prison, an episode that saw two guards and three prisoners killed and a further two inmates executed for their role in the murder of Correctional Officer William A. Miller.

The escape plan itself was fairly straight forward and would have been a masterful move had it worked.
Officer Miller was over seeing Bernard Coy, who was sweeping the floor when he was called over to the c block door by Marvin Hubbard who had just returned from cleaning the kitchen areas. Whilst Miller was carrying out a check on Hubbard to make sure he hadn't taken any contraband he was attacked from behind by Coy and between the two men they restrained Miller, grabbed his keys and released Joe Cretzer and Clarence Carnes. Coy then scaled up to the gun gallery with a home made tool to spread the bars at a weak spot. Having greased himself up and starved himself for a few weeks Coy was able to slip in and lay in wait for officer Burch. After surprising Burch on his return he restrained him and lowered his Colt M1911, clubs and keys down to the others below.

Quickly moving on D-block they surprised Officer Cecil Corwin and forced him at gunpoint to release a dozen more prisoners, many of whom returned to their cells not wanting to be part of the escape attempt. However Sam Shockely and Miran Thompson joined the attempt.

The plan was to break out of the main doors using the guards keys and then using the guards as cover move to the launch (which docked between 14:00-30 daily) and head for the freedom of the mainland.
Luckily Miller had held on to the yard key so as not to disturb the Gun gallery guard, Burch, whilst he was on lunch, when they realised what was happening Miller quickly dropped the yard key down the toilet in the cell they were being held in. In the confusion of what keys to use the prisoners managed to jam the lock - the escape attempt had all but failed.

There were now up to nine guards held captive in cells as they each began rotation and suddenly found themselves in the Prisoner held block. In frustration Coy opened fire on guards in a nearby watch tower wounding one, he also bumped into assistant Warden Ed Miller who was carrying out a reconnaissance in force and fired on him too.

The alarm was raised and the area locked down.

Back in the block, Thompson and Shockely urged Cretzer to open fire with a Colt pistol on the guards so that they wouldn't be able to testify who was in the escape attempt. He openned fire in the enclosed space and it resulted in five injuries (three serious) including William Miller who would later die from those injuries.
At 18:00 another armed reconnaissance was organised under Lieutenant Bergen. The aim was to break into the gun gallery and gain the upper ground over the Prisoners and force them to surrender or be killed in a shoot out.

One of the guards was Senior Corrections officer Harold Porter Stites.

Stites had been born in Kansas on 3rd June 1897 and is recorded as living in Topeka Ward 2, Shawnee, Kansas on the 1900 Federal census with his father F. Herbert Stites, his mother Jennie and brother Fred.
By the 1910 census his father had died but he had a brother Edwin and Herbert.

He signed up to the Army for World War One (on 5th June 1918) where according to his Draft card he had been working as a Head waiter and was described as having blue eyes and brown hair.
His grave stone showed that he served as a Private First Class in 27th Infantry division which took part in the bloody fighting in France breaking the Hindenberg line.


Post war he moved to Levenworth and began working as a prison guard. He married Bessie Etue on 21st November 1925 and they settled to having a family. By the 1940 census the family were living in Los Angeles and he had a Daughter Thelma (b. 1927), James (b. 1929), Robert (b. 1931) and Herbert (b. 1937). It is strange that the family lived in LA rather than on Alcatraz island itself. The guards worked six days straight with one day off and their families lived in close proximity. Even the Guard's family's laundry was washed and repaired by the Prisoners. According to Anna Thuman's book (see references) if a guard was well liked, like her step father Walter Donnington, then you could expect your belongings to be taken care of but if you were disliked then you could find items missing, ripped or buttons torn off.

One can only assume that Stites didn't want his family trapped on the island should something happen. After all at Levenworth the prisoners would escape and disappear, on Alcatraz they could attack the guard's families, take hostages or even commit murder with relative impunity which was a constant worry of the families when an escape attempt was under way.

On 23rd of May 1938, senior Corrections officer Royal C. Cline was beaten to death by three convicts who then escaped onto the roof of the industries building. They attempted to take the guard tower on the roof and threw scrap metal at the guard on duty. Officer Stites returned fire with a rifle and the .45 revolver. Inmates Franklin and Lucas were injured but Limerick was mortally wounded in the head and died soon afterwards. Stites was called into an enquiry into the death of Limerick but was eventually exonerated. It makes sense that in the wake of this that they would have been moved off the island and Stites reassigned for the duration. This would tie into the 1940 census result showing the family in LA.

Now he was part of the team that charged C-block gun gallery. They laid down heavy suppressing fire whilst other guards tried to free Burch. The prisoners returned fire causing the guards, who were trapped in the confined space of the gallery, to take wounds. Stites was hit in the back and shouted out "I'm hit." He was quickly pulled to safety with the other wounded and the assault abandoned but was pronounced killed by an unknown assailant.

The US Marines were called in to settle the siege. At 19:00 another rescue attempt was mounted and unarmed guards rushed D-block under heavy cover from Gun galleries. One was wounded but they managed to recover the wounded guards and got them out to safety. When all was clear the barrage began. Holes were drilled in the roof of the block and grenades dropped down to corner the prisoners in a Utility corridor. By the next day they telephoned Warden Johnston to broker a deal but were told unconditional surrender was the only option. Later that day a guard on patrol was shot at and the barrage began again until 21:00. The following day armed groups of guards would sporadically run through the corridor and fire off rounds. At 9.40 the bodies of Cretzer, Coy and Hubbard were discovered and the siege was lifted.

For their part in the murder of Officer Miller, Shockley and Thompson were sentenced to death together in the San Quentin Gas chamber and Clarence Carnes was sentenced to life as he was only 19 and too young to stop them from killing Miller. 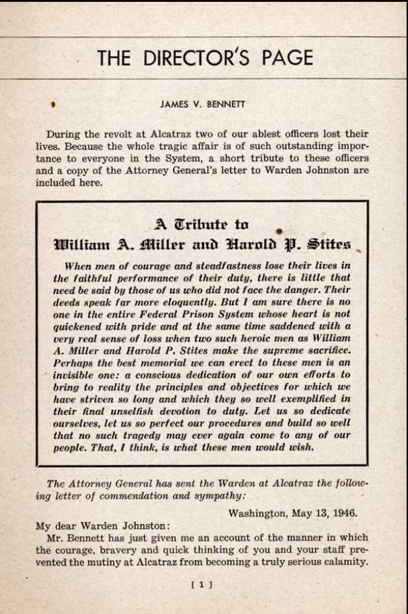 http://www.findagrave.com/cgi-bin/fg.cgi?page=gr&GRid=10819 For details of his grave and death.

http://www.bop.gov/about/history/docs/fallen_hero_cline.pdf on the 1938 breakout attempt

http://www.bop.gov/about/history/docs/fallen_hero_stites.pdf on the death of Stites

Census' information from Ancestery.co.uk and the 1940 census here.

A Brief History of Alcatraz by the US Department of Justice, Kindle edition